Pathos Acoustics was founded in 1994 by the will of three “pioneers”: Gaetano Zanini, Gianni Borinato and Paolo Andriolo in the city of Vicenza, a refined capital located in northern Italy, famous for the magnificent monuments of Andrea Palladio. And the tradition of making something exceptional has continued since the days of Palladio. Today in this area the main activities are the mettallurgic industry, goldsmithing and fashion. This city continues to promote innovation and creativity just as it did in the time of Palladio. Pathos combines past, present and future, creating small hi-fi jewels. Highly technological and with design and a sound that leaves no doubt: these products offer something truly unique.

The story of Pathos began in 1994. Gianni Borinato had the idea of creating a new amplification circuit and asked his two friends, Paolo Andriolo and Gaetano Zanini, to help him verify all the opportunities that this technology could offer. They therefore decided to build the first prototype: considering that Gaetano owned a high-end store in Vicenza, they had all the possibilities to be able to perform tests and comparisons. At first the three pioneers thought that the amplifier used as a reference did not work, in reality the new circuit provided sound performances out of the ordinary, already from the very first prototype. At first there were several uncertainties, but this amplifier could not but be put into production. In other words, Pathos was born precisely to develop and disseminate a new amplification circuit called INPOL (Linear Pump Tracker). INPOL is a trademark exclusively owned by Pathos and the circuit has a worldwide patent.

Paolo, passionate about industrial design, then began to realize aesthetics. The result was the T.T. – hailed by many as the most beautiful amplifier ever produced. One of the few Hi-Fi classics of his time – a living legend.
Gaetano then began production, without compromising on the use of materials or components. Together with technological innovation, the design and fine finishes of the products are equally fundamental. Over the years the idea “the worse the aesthetics and the better the sound” had spread quite widely in the audio industry. Pathos proved everyone wrong. Pathos products speak to many of our senses, anyone can appreciate them daily. A simple glance at a Pathos product is enough to make the customer feel that he has purchased something truly exclusive. Sometimes it is better to listen with your eyes wide open.
All Pathos products are handmade in Italy, in Vicenza following the long tradition of Italian craftsmanship. Only the best components are used, selected to guarantee unparalleled quality; all products are tested following a precise program to ensure quality. Exclusive products deserve exclusive treatment.

A new opportunity for the market

The Pathos company was born like this but, it was not an easy process, considering the market in which it would operate. The audio industry is known for the presence of a myriad of brands, it is a rather limited and not easy market. But surely there was – and still is – enough space for a brand that offers innovative solutions and an uncommon design. The hi-fi industry needed someone who dared to follow the so-called “unorthodox approach.” Pathos was therefore founded with the awareness that there is always room for those who have something authentically new to propose in what is the exciting search for maximum fidelity in the reproduction of music.

The initial hypothesis, which conditioned the entire InPoL project, starts from the same need to avoid
any sort of global exit-entry counter-reaction. In fact, it is believed that, although a well-realized counter-reaction entails considerable advantages, it still constitutes an artifice, which cannot but have implications on the sonic result in terms of loss of naturalness and “angularity”. A good project that does not involve the use of counterreaction involves, conversely, a higher rate of distortion and a slightly worse damping coefficient, compared to the possibility of reproducing all the naturalness and harmonic content of the original signal.

InPoL was born from this design hypothesis: to create a power stage without counter-reaction, with a contained distortion and an acceptable damping coefficient. For this purpose, a single solid-state component is used in a tracker configuration with theoretical voltage gain = 1 and with very high current gain. The polarization is in pure class A in order to avoid the cross-over distortions typical of class AB stages. Only NPN semiconductors are also used, which are intrinsically different from PNP semiconductors, a diversity that only counter-reaction could reconcile.

InPoL uses a large inductor as an energy reserve, which is driven by the transistor, which manages it as a “controlled voltage generator”. In this way the theoretical efficiency is doubled, from 25% to 50%, and a low output impedance is obtained, necessary for a correct damping coefficient. InPoL amplifies 1 in voltage therefore “copies” the signal received at the input without changing the harmonic content and leaving the naturalness of the signal unchanged. The only task of InPoL is therefore to provide the current necessary for the correct driving of the speakers. InPoL is patented worldwide. 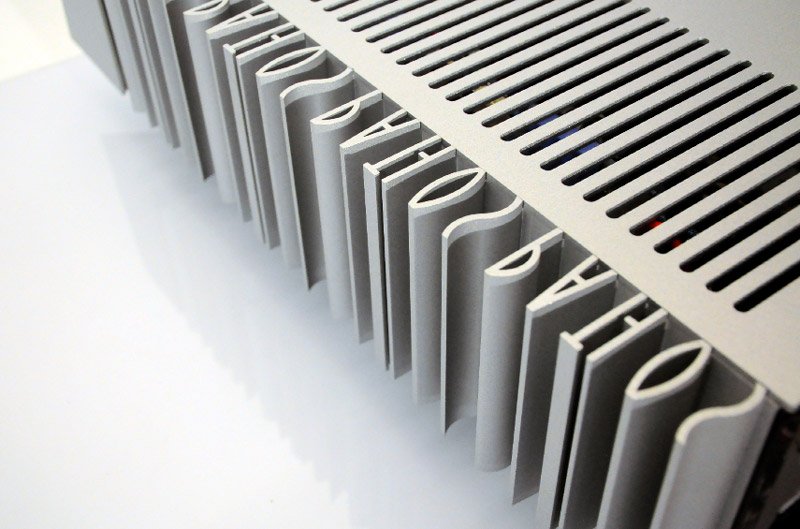 The philosophy that accompanies the Pathos brand, the “unorthodox approach,” has actually created the benchmark for the business philosophy that goes with it. Pathos’ approach to music reproduction knows neither dogmas nor rules, but the goal is clear: to reproduce music in the most authentic way. Making products similar or the same as those already on the market certainly does not belong to the Pathos philosophy: every machine designed and built by Pathos must contain technological innovation (innovation understood not as a mere technical exercise!) but something capable of offering authentic advantages for the achievement of the first and only goal: the “faithful reproduction of music”.

Currently Pathos is known and appreciated all over the world as a manufacturer of high quality amplifiers. These products have received several international awards and positive reviews from the press. The location has changed twice over the last 10 years, just to meet an ever-increasing demand.

The Pathos factory is now five times larger than the beginning. This allows us to restart our work: one department specializes in woodworking, while another in metalworking and so on. And the Pathos laboratory will grow even more, as Pathos will focus more and more in the future on technological innovations. Thanks to the new projects, the “unorthodox approach” will continue to excite both ears and eyes. It is only and always about passion.